Last month there was a major spill of waste from an alumina processing in China, only one year after the destructive spill of mine tailings at Minas Gerais in Brazil. These follow similar spills in Mount Polley, Canada, in 2014 and Ajka, Western Hungary, in 2010. 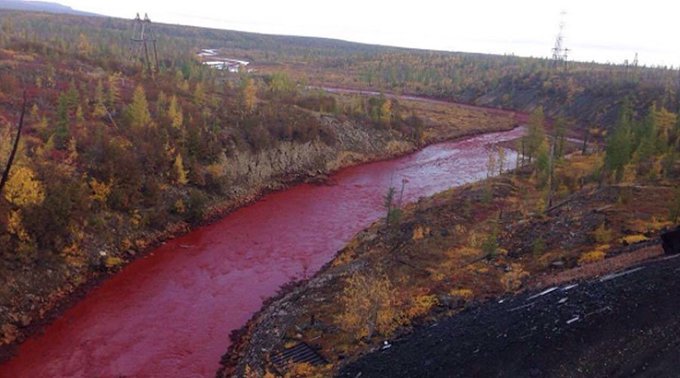 Striking images of the red river have captured the world’s imagination, evoking blood, danger, and even the end of days. But this “mysterious” phenomenon may have a fairly straightforward explanation.

Blood from a stone

When water is polluted by mining and mineral processing, a reddish hue is usually associated with iron oxides, that are common in mineral-rich areas. Indeed, in areas where the natural weathering of metal sulphide minerals (such as pyrite) occurs, it’s common to find streams named for their reddish hue, such as the Red River in England, Rio Tinto in Spain and Afon Goch in Wales.

Mining mineral deposits greatly increasesthe chance that the natural process of weathering will speed up, releasing more metals into the environment. While iron oxides that result from this weathering are relatively benign chemicals, these sediments can smother stream beds, with major ecological consequences.

What’s more, the waste from mining and mineral processing can be acidic, and contain a range of metals that are highly toxic to aquatic life and potentially damaging to public health.

We don’t yet know exactly what chemicals have caused the Siberian incident. The owners of the plant, Norilsk Nickel, have denied responsibility but have said they will monitor the situation.

But if the spill was of slurry (waste rock) destined for the tailings pond, it would be acidic and rich in nickel and copper (among other elements), which are very toxic to aquatic life. In similar cases at Aznalcóllar (Spain)and Baia Mare (Romania) at the turn of the century, the spills led to long term ecological impacts on birds, mammals and fish.

Throughout much of Europe and North America, the bulk of heavy primary industry has shrunk over the past 30 to 40 years. And thankfully, the risk of major pollution disasters is relatively small, due to the enforcement of high regulatory standards through waste tip inspections.

But abandoned storage facilities for metal tailings can still fail, and the legacy of historic mining can still be seen (albeit in a less spectacular fashion) through the pollution caused by mine waters and the gradual erosion of exposed spoil heaps. For example, 5% of rivers in England and Wales are still polluted by metals from mines abandoned in the 18th, 19th and early 20th centuries.

What’s more, the expansion of mining activity continues on a global level. There’s a growing demand for metal resources both old and new, with mines searching out iron, zinc, copper and lead, as well as rare earths and e-tech metals for renewable energies and new technologies.

As such, the potential for metal waste pollution is increasing on a global scale. This issue is exacerbated by the increased working of lower-grade ores, which leads to a greater portion of waste rock being generated.

Indeed, studies suggest that the human circulation of metals through mining, refining, processing, use and disposal now greatly outweighs the natural flow of metals around the planet, through the slow weathering of bedrock, transportation and transformation of metals. Some observers have even suggested that metal-laden river sediments associated with early mining activities are a good marker for the Anthropocene epoch – the designated period in which human activity has had a profound effect on the climate and the environment.

A solution to pollution

The mining industry itself has taken major strides to limit its environmental impacts through various initiatives, in no small part because of the significant costs of managing long-abandoned “legacy” sites. Steps taken include better source control, and novel approaches to deal with long-standing mine pollution, such as biological treatment of metal-rich waters.

Despite this progress, pollution problems can and will still occur. These may be associated with legacy waste, than with a lack of public funds to address them, or less scrupulous mining companies operating in lax regulatory regimes.

In many cases, sudden failures of mine waste storage facilities are caused by extreme weather events. As such, the resilience of current and historic mine waste facilities to the expected impacts of climate change needs to be a priority.

The striking appearance of the red river in Siberia is a stark reminder of the potential environmental costs linked with modern technology, and the severe pollution risks associated with one of humanity’s oldest industries. We wait to see what the Russian authorities officially conclude was the cause of the river changing colour. But better reporting of such incidents globally – which has been enhanced by social media in recent years – will add pressure on mining companies to continue to clean up their act.