Munduruku indigenous people and other communities from the Tapajós river region, whose land is at risk from planned hydroelectric projects.

Construction of 40 major dams in the Brazilian Amazon would destroy the heart of the world’s largest rainforest, severely affect indigenous people and is not economically justifiable, says Greenpeace in a major new report.

The five large dams and 35 others planned for the Tapajós river and its tributaries south of Santarém have been promoted by the government and global engineering and energy companies as a solution to Brazil’s recession and severe electricity shortages.

The projects form part of Brazil’s plans to install 25GW of new hydropower capacity by 2024 and create a massive industrial waterway to allow soya and other crops to be exported more easily to Europe.

But Greenpeace questions the official forecasts of how much energy will be generated and says Brazil’s dash for hydropower on the Tapajós is a potentially disastrous ecological and economic mistake.

Aside from flooding hundreds of square miles of pristine forest, the dams will lead to uncontrolled economic exploitation, massive deforestation and colonisation of the wider Amazon basin with devastating ecological consequences, it says.

“There are other far less harmful ways to generate as much energy as the country needs, ways which can be brought into operation more quickly than hydropower. It is extremely doubtful whether hydropower is a reliable or cost-effective approach, making an energy future based on dams a potentially disastrous mistake,” says the report.

Greenpeace says it intends to work with the Munduruku indigenous people whose lands would be drowned by the 8,000-megawatt São Luiz do Tapajós (SLT) dam. If built, this would be the sixth-largest hydroelectric dam in the world. The dam would be 7.6km wide and flood hundreds of square kilometres of rainforest.

Plans for the dam are currently on hold after Brazil’s environmental agency, Ibama, suspended the licensing process over concerns about its impact on the indigenous community in the region. 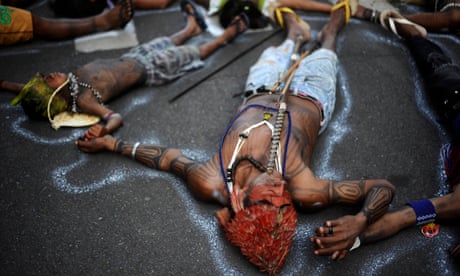 “The Munduruku people have been fighting for the Brazilian government to formally recognise their land for many years. Greenpeace have sent activists to the Munduruku villages to assist in physically demarcating their land and installing solar power systems, as well as campaigning internationally in support of their cause,” says the report.

“This is an important battle not just for the Munduruku people, but for everyone around the world since we are talking about one of the biggest forests that still exist on the planet,” said Juarez, the Munduruku chief of the Sawré Muybu indigenous land.

The SLT dam is a top priority for the government because it aims to turn the huge Tapajós river into an industrial waterway and shipping hub with the goal of allowing soya beans produced in the Mato Grosso to be shipped to the Atlantic ocean and on to Europe and the US.

The Munduruku and three other indigenous groups in the Tapajós basin have questioned the legality of the dams and last year declared the government incapable of conserving biodiversity.

A joint manifesto claims that the government, which is embroiled in a major corruption scandal, builds dams with hastily prepared studies and dubious motives.

“It does not seek to understand the consequences of the destruction of nature and our lives,” it says.

Greenpeace is calling for the Tapajós to be protected and demanding that companies refuse to play any part in the dams’ construction. Brazilian, US, European – including British – and Chinese engineering companies and banks have all prepared bids for the SLT dam.

“In recent years the government’s approach to the Amazon has become one of development at any cost and often with questionable justification,” says the Greenpeace report.

“It is time the Brazilian government admitted that clean Amazon hydropower is a dangerous myth that sows misery and destruction while failing to provide energy security. The economics of large dam schemes in remote tropical rainforests do not stack up,” it concludes.

If built, the dams on the Tapajós would flood an area the size of greater London, Paris and Amsterdam combined. The government’s own environmental impact study uncovered eight new species of mammal living in the area under threat, including a new monkey and five species of bat.