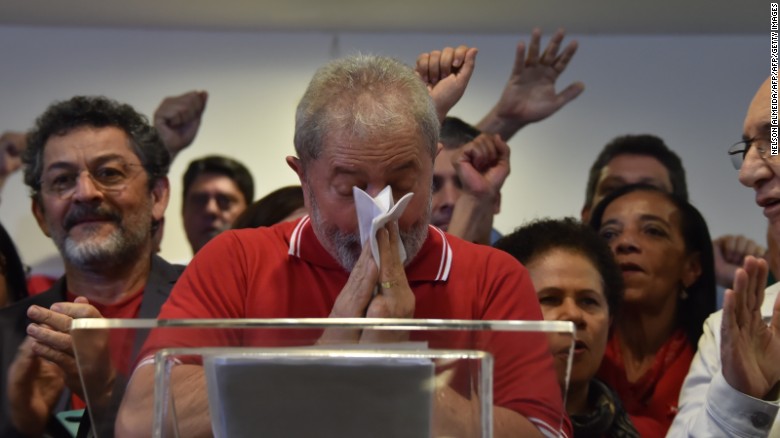 Former Brazilian President Luiz Inacio Lula da Silva has denied any wrong doing after corruption charges were filed against him.
A Brazilian judge has decided that the corruption case against former Brazilian president Luiz Inacio Lula da Silva, his wife, and six others will move forward, according to state media.
Agencia Brasil reports that Judge Sergio Moro, who’s been leading a corruption probe at the state-run oil company Petrobras, ruled on Tuesday that there is enough evidence for Lula, as he is universally known, and the others to stand trial.
Last week, Brazilian prosecutors presented corruption charges relating to the Operation Car Wash money laundering investigation. Prosecutors allege the former president benefited from “illicit advances in connection with a renovation of a triplex” in a beach town near Sao Paulo.
Lula da Silva sent out a series of tweets after the charges were filed, calling them “fiction” and claiming he had “been a victim of extremely serious illegalities,” according to the ex-president’s defense.
“I respect institutions, I respect the law,” he added at his news conference last week after the charges were presented.
“I will give as many testimonies as I need to,” he said. “Call me and I will be there because the only thing that I am proud of is that I earned the right to walk with my head held up high in this country.”
Why Brazil impeached President Rousseff
Lula da Silva, 65, was inaugurated as Brazil’s president in 2003 and handily won his bid for a second term. He was succeeded by his political heir, Dilma Rousseff, who was ousted from office last month when Senate colleagues voted to impeach her for alleged mismanagement of funds.
Lula finished his second term in January 2011 with a 90% approval rating, just months before it was announced he would undergo chemotherapy for a malignant tumor in his larynx. His cancer was found to be in complete remission in February 2012.
When the former president was questioned by police in March over allegations of corruption, he strongly denied them. The same day he was questioned, authorities searched his home, the Lula Institute and his son’s home, among other locations.
Lula da Silva said he hopes the latest allegations will be the last in what he considers a political witch hunt, one that’s already forced Brazilian House Speaker Eduardo Cunha, along with Rousseff, out of the office.
“This novel is coming to an end,” Lula da Silva said. “They have charged Cunha, they have gone after Dilma and now they need to conclude this novel. Who is the criminal? Let’s give an end to this novel. Let’s end with the political life of Lula.”