The communities secretary, Sajid Javid, made significant legal errors when he overturned a council’s refusal to allow test drilling at a fracking site in Lancashire, a court has been told.

Residents opposed to the drilling sites near Blackpool told Manchester high court that Javid acted “in breach of the rules of natural justice” when he gave the green light to test fracking in October.

Lawyers for the Preston New Road Action Group asked the judge, Sir Ian Dove, to quash the government’s decision on the grounds that it was unlawful.

The site of four wells in Preston New Road, near Little Plumpton, is the biggest fracking mission to be given the go-ahead to date. Round-the-clock protests have hampered the gas firm Cuadrilla’s preparatory work since January. 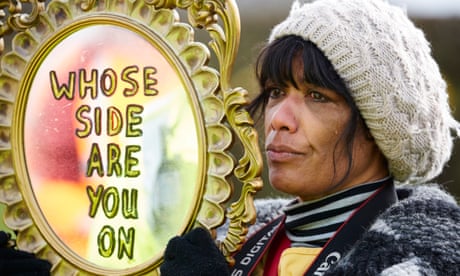 Campaigners wearing hi-vis jackets formed a small picket outside the court on Wednesday morning, holding anti-fracking placards and a large banner saying “Manchester Not for Shale”.

Making the legal challenge alongside the residents is Gayzer Frackman, a professional clown from Lytham St Annes who changed his name by deed poll from Geza Tarjanyi.

Marc Willers QC, for Frackman, said the site would lead to a “considerable quantity of greenhouse gas emissions”. He told the court the gas produced at the fracking site would go directly to homes and industry.

“There will be no assessment of these greenhouse gas emissions arising from the gas being pumped through the gas grid to homes and industry.,” he said.

Outside court, a solicitor for the residents said the case “boils down to two issues, fairness and harm to the local area.”.

Rowan Smith of the law firm Leigh Day said: “Our clients believe that the government has made significant legal errors in overturning the council’s refusal of planning permission to allow fracking on the site.

“Firstly, the campaign group feels it has been treated unfairly, because: a) it was denied a fair hearing during the original planning inquiry, since it had already closed its case by the time the developer departed from the pre-agreed parameters of the inquiry. 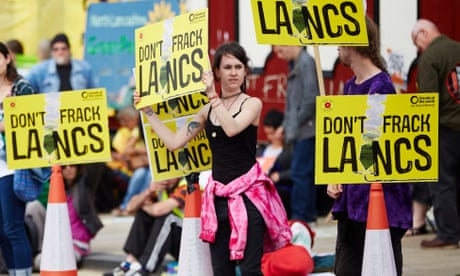 “And b) the planning inspector failed to properly explain certain inconsistencies in her final report; and c) the central government is seeking to overturn a decision made at local level to refuse planning permission.

“Secondly, the campaign group is arguing that the government has breached planning policy, by: a) failing to treat the significant harm to Lancashire’s valued landscape over the next two and a half years at least as a breach of the policy designed to protect the local landscape, which would otherwise mean that the presumption against planning permission would kick in.

“And b) applying a more stringent test than the correct one, in respect of whether the visual impact of (amongst other disruptions) the construction of a 36m drill rig within 500m of some residents’ homes would be unacceptable or not.”

The government is set to defend its decision when the three-day hearing resumes on Thursday.

Javid decided the council was wrong to refuse planning consent on the basis of visual impact on the landscape and noise concerns at the site, which is on a busy 50mph road connecting Fylde villages with Blackpool.

A spokeswoman for the Preston New Road Action Group said: “PNRAG this week take their fracking legal challenge to the high court in Manchester.

“We have consistently fought through legal process to have the voice of local residents heard. The voice of our community was loud and strong. It said no to fracking.

“Local democracy which said no was overturned by the secretary of state in Westminster. He has not visited or engaged with the communities that will be affected to understand the real impacts of his decision. Is that just or democratic?

“Democracy died in Lancashire after last October’s decision. We hope it can be resurrected by the high court in Manchester finding this decision to allow fracking unlawful and one which must be revoked immediately.”

Fracking is an extreme form of energy extraction that involves drilling down into the earth before a high-pressure water mixture is directed into the rock to release the gas inside.

Opponents argue that it causes water pollution and even earthquakes. In 2011, Cuadrilla suspended test fracking operations near Blackpool after two earthquakes of magnitude 1.5 and 2.2 magnitude were recorded in the area.

Proponents of fracking argue that one of the richest shale gas resources ever discovered lies in the Bowland shale beneath Lancashire and Yorkshire. Just 10% of it would be enough to provide 50 years’ worth of British needs, according to Lord Ridley, a pro-fracking peer who owns his own coal mine.