Habitat loss is the most insidious of all threats facing land-living wildlife.

Habitat loss is the most insidious of all threats facing land-living wildlife, and protected areas like national parks are one of the best ways to combat the destruction. But in research published recently in Conversation Letters, we show that in some places the pace of protected areas isn’t keeping up with the losses.

We found that since 1992, an area of natural habitat two-thirds the size of Australia has been converted to human use (such as farms, logging or cities). Half of the world’s land area is now dominated by humans.

When we looked at specific habitats (or “ecoregions”), we found that in almost half of them, more habitat has been lost than has been protected. Of developed nations, Australia is performing the worst.

196 signatory nations of the Convention of Biological Diversity, including Australia, are meeting in Cancun, Mexico, to discuss their progress towards averting the current biodiversity crisis.

While topics will vary widely from dealing with climate change, invasive species and illegal wildlife trade, a chief issue will likely be one that has been central to the convention since its ratification at Rio in 1992: how best to deal with habitat loss.

The view from space

Human activity affects the planet on a scale so vast it can be easily seen from space. Whether it’s deforestation in the Amazon, urban development in Asia, or mining in the Arctic, humans have modified Earth’s land area dramatically.

For almost all wild species on Earth, once the places they live have been dramatically altered, they are unable to survive in the long term. The number of vertebrate species extinctions has been 53 times higher than normal since 1900, and the majority of them are associated with direct habitat loss.

The best tool we have at our disposal to combat habitat loss, alongside strict land regulation, is the creation of large, well-connected protected areas, especially in places that are likely to be at risk of future destruction.

When well managed and strategically placed, protected areas work at protecting biodiversity from destructive actives such as agriculture, mining and urbanisation.

In the two and a half decades since the Rio de Janeiro Earth Summit in 1992, there has been a dramatic increase in protected areas. Now 15% of the land is placed under protection – an area greater than South and Central America combined.

That’s the good news. The bad news is that it may not be enough.

The degree of degradation varies across the major ecosystems. Some areas such as the tundra have been only slightly modified. Other ecosystems have been decimated: 90% of mangroves and sub-tropical forests have been converted to human uses.

Concerningly, since the convention was ratified in 1992, an extra 4.5 million square kilometres of land has been converted from natural habitat to human land uses. And much of this loss occurred in areas that already faced considerable losses in the past.

As a consequence, almost half of the world’s 800 ecoregions – those places that have distinct animal and plant communities – should be classified at very high risk, where 25 times more land has been converted than protected.

Forty-one of these ecoregions are in crisis, where humans converted more than 10% of the little remaining habitat over the past two decades and there is almost nothing left to protect. 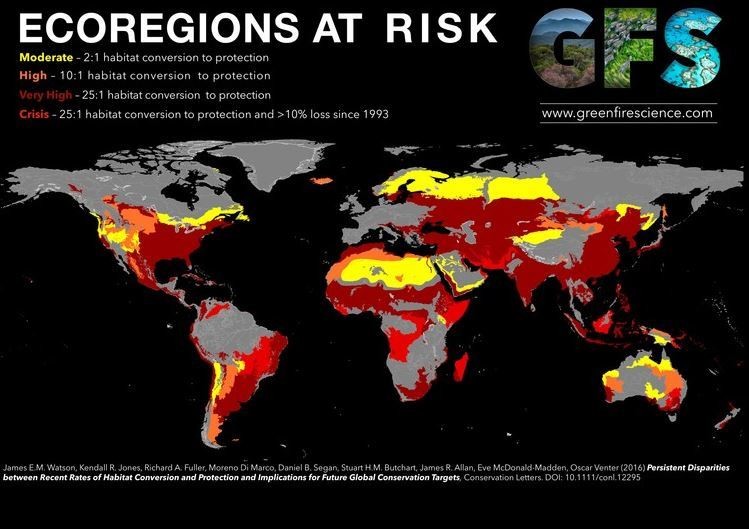 These crisis ecoregions are concentrated in Southeast Asia (Indonesia and Papua New Guinea), and Africa (Madagascar, Democratic Republic of the Congo and Angola). It’s crucial that we establish protected areas in these places, but conflict and corruption make them some of the hardest places for conservation to work.

While crisis ecoregions are mostly confined to the developing world, arguably the most concerning outcome of our research is that in many developed countries, like the United States and Canada, the proportion of protected areas to habitat loss is slipping.

And Australia is the worst performing developed nation of them all. Habitat loss greatly outpaced protection in 20 of Australia’s most wildlife-rich ecoregions. The most threatened ecoregions now include savannas in the southeast and southwest of Australia, and southeast temperate forest ecosystems.

Our analysis shows massive habitat loss occurred in Queensland, New South Wales and Western Australia during the past two decades, driven by land clearing for pasture, agriculture and urbanisation.

Australia has extremely high land-clearing rates and is the only developed nation now containing a deforestation front.

Arguably, things will continue to get worse without land-clearing law reform, but this is challenging, as shown by the recent failure of Queensland’s vegetation law changes and the poor vegetation-offset reforms in New South Wales.

As nations meet in Mexico to discuss their progress towards the Convention of Biological Diversity’s 2020 strategic plan, it is now time for them to undertake a full, frank and honest assessment on how things are progressing.

This means recognising that the current situation, where nations only report on protected area expansion, clearly tells half the story – and it is jeopardising the chance for halting the biodiversity crisis.

Australia must take the lead. It is time for this nation – one of the most wildlife-rich in the developed world – to account fully for both conservation gains and losses, and as such formally report on how much habitat is being destroyed. This is the necessary first step to identify ways to mitigate these losses and prioritise conservation actions in those regions that are at risk.

At the same time, all nations must recognise that the integrity of habitat within existing protected areas must be maintained, especially in those areas that contain imperilled species. Allowing activities which cause habitat loss to occur in protected areas is a backwards step for conservation, and governments must enforce their own environmental policies to stop this.

A good example is Springvale Station in Queensland, where mining is being considered within a newly purchased protected area, clearly threatening its biodiversity.

We need to change how we report on, and deal with, habitat loss, otherwise the mission of the convention – to stop the global extinction crisis – will fail.