Illegally mined gold has overtaken cocaine to become Peru and Colombia’s most lucrative illicit export, according to a new report that warns the shift from drug cultivation to criminal mining in many Latin American countries is fuelling “staggering” human rights abuses and wrecking the environment.

It says the trend is down to high gold prices over recent years and the success of US-led efforts to crack down on drug trafficking from Latin America.

Faced with falling profits from the drug trade, “these groups were quick to realise that taking control of large swaths of land remote from government attention and dominating the enterprises that mined the land would enable them to generate larger profit margins with much lower risk”.

According to the report, Peru produces about 325 tonnes of cocaine a year, earning Peruvian organised crime between $1bn (£708m) and $1.5bn a year. In Colombia, the four major cartels and criminal gangs probably make a similar amount between them in wholesale proceeds from cocaine and heroin.

Illegal gold production, meanwhile, earns Peruvian criminals $2.6bn a year and their Colombian counterparts $2bn. An estimated 28% of Peru’s gold production – or 60 tonnes – is thought to be illegal, while in Colombia the proportion soars to 80%, or 45 tons.

Peru’s tax authority estimates that 35 tonnes of contraband gold, worth more than $1bn, left Lima bound for the US and Switzerland between February and October 2014; the Colombian government believes that the leftwing rebel group Revolutionary Armed Forces of Colombia gets 20% of its funding through illegal gold mining.

The proliferation of artisanal mining operations across Bolivia, Brazil, Colombia, Ecuador, Guyana, Mexico, Nicaragua, Peru and Venezuela involves a workforce of hundreds of thousands of small-scale miners, many of whom are vulnerable to abuse, exploitation and trafficking.

Researchers found that fake job offers were being used to lure girls from all over Peru – some as young as 12 – into working in brothels in the Madre de Dios region or the mining town of La Rinconada. Police estimates put the number of Peruvian and Bolivian girls trafficked for sexual exploitation to work in bars frequented by miners in La Rinconada at more than 4,500. The thinktank describes the scale of sex trafficking into mining camps as “staggering”.

The report also found evidence in Venezuela that illegal miners are exploiting members of the indigenous Yanomami tribe: several people from Yanomami communities have been found with slave numbers tattooed on their shoulders.

In Sur de Bolívar, Colombia, 1,500 workers employed at a mine owned by the wife of a former rightwing paramilitary leader were unable to leave the area unless they were accompanied by the narco-paramilitary group operating in the area.

Estimates suggest there are 45,000 people working in illegal gold mining in Bolivia, almost a third of whom are children. Five years ago, the Bolivian National Ombudsman, Rolando Villena, alleged that children could be bought for between $3 and $7 in the mining region of Potosí.

The report says the environmental impact has been similarly devastating. Experts told researchers that the illegal gold rush that began more than a decade ago has led to massive deforestation. Between 2005 and 2012, twice as much rainforest was deforested compared with the previous 20 years.

Small-scale gold miners are estimated to dump more than 30 tonnes of the mercury they use to extract gold into rivers and lakes in the Amazon region each year. The practice poisons fish and causes damage to humans living as far as 400km downstream. 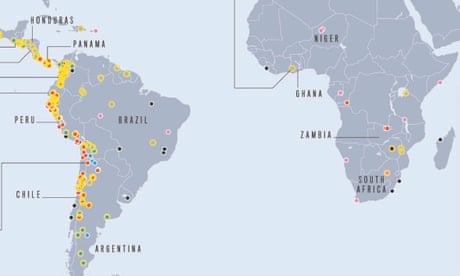 In Colombia alone, the government believes it will take nearly $11bn and 25-40 years to reverse the damage caused by mining. In Peru, it is thought that illegal gold mining destroys 5-10 hectares (12.35-24.7 acres) of national protected rainforest areas each day in Madre de Dios.

It is calling on export countries to do more to help informal miners gain legal status, to improve their inspection processes and to hold companies and criminal groups accountable for the illegal extraction and export of gold.

Corporations, Global Initiative says, must adhere to the UN guiding principles on business and human rights and do a better job of mapping out supply chains and ensuring that gold is sourced responsibly and ethically.

Livia Wagner, private sector adviser at Global Initiative and the author of the report, said the scale of the abuse and destruction wrought by illegal gold mining should not be underestimated.

“The consequences of illegal gold mining are not only on a local level – labour exploitation; sexual exploitation; extortion by organised crime groups – they are also obvious on a global level when you think about the destruction of the environment,” she said.

“This is one of the key things that we have to realise: very often, it’s like, ‘OK this is happening in Latin America; it has no impact on the rest of the world’. Yes. It does.”