Magellan Midstream Partners, an Oklahoma company with more than 10,000 miles of oil and ammonium pipeline, acknowledged that the spill began on Wednesday morning in Worth County, Iowa, and said it was “unsure of the cause of the incident at this time”. 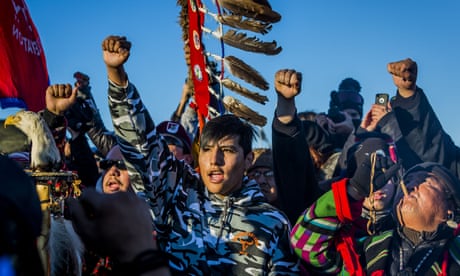 Standing Rock Sioux: ‘we can’t back down now’ on Dakota pipeline fight

The oil has pooled in an agricultural field, according to Karen Grimes of the Iowa department of natural resources (DNR), but cleanup efforts are being somewhat hampered by heavy winds and snow.

The spill does not appear to threaten any waterways and has not caused any injuries or evacuations, according to the company and the DNR.

While the spill in Iowa is “not a major disaster” compared with other spills, said Greenpeace researcher Jesse Coleman, it does draw attention to the risks of pipelines.

Proponents of oil pipelines argue that it is a safer method of transporting fuel than trains. More than 7m gallons of oil were spilled in more than 1,000 pipeline leaks between 2010 and 2015, according to an analysis by High Country News.

“This really speaks to the central problem, which is that we’re not even surprised that this company spilled something out of a pipeline because it’s inevitable,” Coleman said. “That’s what’s really frightening about these larger pipelines.”

“You can never really rehabilitate an area that got soaked in gasoline. Even this spill, it can’t be cleaned up,” Coleman added. “That gives you some idea of what will happen when the Dakota Access pipeline or the Keystone XL pipeline fails. It’s irreversible.”

“The problems Magellan has had just show that pipelines spill and they’re not safe,” said Wally Taylor, the legal chair of the Iowa chapter of the Sierra Club, which has joined other Iowa environmental groups in campaigning against the Dakota Access pipeline.

The Magellan spill occurred just days after the company reached an $18m settlement with the Environmental Protection Agency (EPA) over alleged violations of the Clean Water Act.

On 19 January, the EPA announced that Magellan had agreed to spend $16m on “injunctive relief” and pay a $2m fine over three pipeline spills in Texas, Nebraska, and Kansas. The injunctive relief includes completing cleanup efforts in Nebraska and improving damage prevention training.

Representatives of the EPA either declined to comment or did not respond to queries from the Guardian. On Monday, the Associated Press reported that EPA staff have been barred from speaking to reporters.