Munduruku Indians demonstrate in front of the offices of the Brazilian ministry of mines and energy in Brasilia.

I’ve spent a lot of time with indigenous peoples in remote places. So when I argue that the best way – or at least the cheapest way – to stop climate change is to grant land rights to indigenous communities, you might suspect I’m not coming from an entirely objective viewpoint. You’ve probably also heard various industry spokespeople saying the best and cheapest way to stop climate change is through windfarms, solar panels, electric cars and cavity wall insulation. But while I may be biased, and may even have “gone native” now and then, I’m not trying to sell you anything.

What is the value of a forest and the land it stands on? There’s the value of the timber it can produce, and after that, the crops that could be grown. Or the value of an Amazonian valley flooded for a hydroelectric dam.

And forests also have a value that even environmental scientists can miss, but is very, very real to forest peoples. As the environmentalist David Suzuki says: “The way we see the world shapes the way we treat it. If a mountain is a deity, not a pile of ore; if a river is one of the veins of the land, not potential irrigation water; if a forest is a sacred grove, not timber; if other species are biological kin, not resources; or if the planet is our mother, not an opportunity – then we will treat each other with greater respect.”

This is why indigenous peoples are the forests’ greatest conservationists. They can cut through the Gordian knot of the UN’s interminable processes. They see and understand the value that enlightened, developed cultures are blind to, and which modern science is only beginning to rediscover. 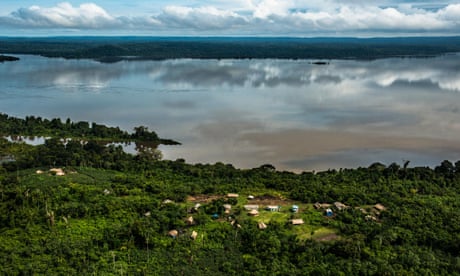 Translating that value into the hard currency we value is difficult. The World Resources Institute has taken a step in that direction, with a study of the environmental and economic costs and benefits of governments granting indigenous land rights in Brazil, Bolivia and Colombia. It reports that giving indigenous people land rights leads to the preservation of forests as carbon sinks. And, as a means of storing carbon, it is between five and 42 times more cost-efficient than fitting carbon capture and storage systems to fossil-fuel power stations.

If we are unwilling to spend money on protecting rainforests, their spectacular biodiversity, indigenous cultures, their ecosystems and their ineffable beauty and meaning, then we’ll have to spend a lot more sucking from the atmosphere what was once a rainforest, and burying it in the ground.

There is a test case going on right now in Brazil, home of the world’s biggest rainforest. The country’s official body for looking at indigenous people’s land rights, FUNAI, is due to decide this month on whether to grant them to the Munduruku people. They live in the Tapajos basin, an area in the heart of the Amazon being eyed up for the construction of more than 40 hugely destructive mega-dams.

The Munduruku can protect their bit of the Amazon for us, as they have done for centuries, preserving its amazingly varied flora and fauna and saving us the money we’d have to spend on taking carbon out of the atmosphere if industry is allowed turn it into carbon emissions.

The Munduruku have been campaigning for their rights for decades. The Brazilian constitution says they should be given them. A cold, hard, financial cost/benefit analysis says they should be given them. And if the Munduruku don’t get their land rights, there’s an industrial-scale queue of people waiting to trash their beautiful home. While many of us have yet to fully understand this, the truth is, their home is also our home.