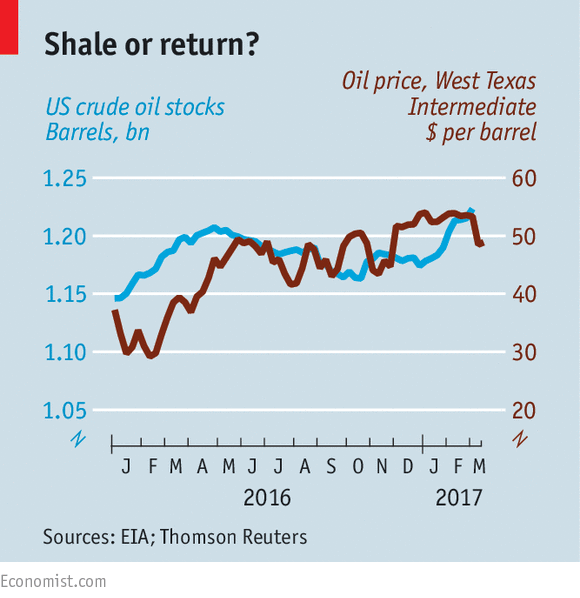 OPEC’s cuts have not yet had the desired effects

IT SOUNDS like a scene from “The Big Short”, a film about financial speculation. Light aircraft fly photographers close to America’s oil-storage facilities, using infra-red imaging and photographs to gauge the rise and fall of levels of crude in 2,100 storage tanks, in an attempt to work out whether oil futures are overvalued or not.

In fact, it is less mischievous than that. The intelligence-gatherers work for a company, Genscape, that sells the information to traders everywhere, giving them a few days’ jump before storage surveys are published by the government.

These data are particularly useful at a time when near-record levels of oil inventories in America are weighing on oil prices and frustrating attempts by OPEC, the producers’ cartel, to prop up the market. The high level of inventories is vital to an understanding of why crude prices suddenly plummeted this month, according to the International Energy Agency (IEA), a forecaster. West Texas Intermediate is back below $50 a barrel, its level before OPEC in November agreed to cut output (see chart).

Three reasons explain why the tanks are so full. Firstly, OPEC’s agreement with non-members such as Russia to cut production from January 1st set off a flurry of hedge-fund buying, pushing oil prices higher. American shale producers were quick to take advantage of higher prices by pumping more oil. The number of American oil rigs has risen to 617 from 386 a year ago, producing 400,000 barrels a day more than at the lows in September. Much of that has gone to storage terminals like Cushing, Oklahoma.

Second, OPEC has been hoisted by its own petard. In the months before it started cutting output, it sharply raised production and exports. After weeks of trans-Atlantic travel, this oil is showing up in higher American imports, put into storage when refineries were idled for maintenance.

The third factor is the shape of the curve of futures prices, which is closely related to the level of inventories. When OPEC orchestrated the January cut, it hoped to rebalance supply and demand by mid-year, and push the futures market into “backwardation”, meaning prices in the long term were at a discount to short-term prices. Backwardation reflects the market’s willingness to buy oil and use it rather than storing it. The strategy worked for a while.

But since the release of bearish American inventory data on March 8th, the market slipped back into “contango”, the name for the discount at which near-term prices trade to longer-term ones. Contango makes it more worthwhile to buy oil and store it. Hillary Stevenson of Genscape notes that the storage costs in tanks in Cushing are about 41 cents per barrel of oil per month, compared with a one-month contango of about 65 cents.

Contango can be a self-fulfilling prophecy, because the more oil is stored, the lower short-term prices go. So OPEC’s challenge is to try and break the loop, possibly by promising to extend its output cuts beyond June. But in that case, the shale drillers are likely to add yet more wells. And so the merry-go-round will continue.

Source of article: The Economist