The world is witnessing an unprecedented surge in wildlife trafficking that is stealing the irreplaceable natural wealth of countries, greatly hindering development, paralysing efforts to eradicate poverty, and undermining conservation efforts. This illicit trade in wildlife is well organised, transnational and happening across every region.

As countries prepare to meet in Johannesburgthis weekend for the 17th meeting of the Conference of the Parties to Cites (CoP17), there is increasing recognition that to curb the global surge in wildlife trafficking we must counter the corrosive corruption that enables it.

Corruption aids and abets transnational organised crime, and is particularly rife where there is high-volume wildlife trafficking, such as with raw elephant ivory. 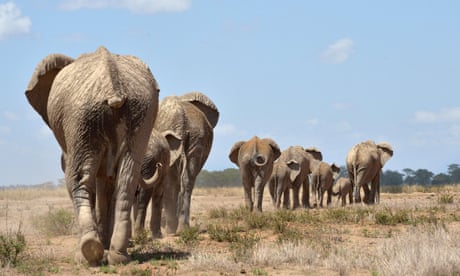 Kenya’s new front in poaching battle: ‘the future is in the hands of our communities’

The first ever World Wildlife Crime report, published by the United Nations Office on Drugs and Crime (UNODC) earlier this year, says more than 7,000 species of wild animals and plants are threatened by this illicit trade. It highlights that certain forms of illegal wildlife trade, such as the international illicit trade in rhino horn, would not be possible without corruption.

It is well established that corruption harms people, undermining the rule of law, institutions and sustainable development. By enabling wildlife trafficking, it is also helping to drive species of wild animals and plants to extinction.

Animals like elephants and rhinos are being slaughtered for their ivory and horn. Corruption often enables the passage of goods from source, through transit, to illicit markets and the unscrupulous dealers who may be many thousands of kilometres away from where the specimens were stolen.

It’s not just iconic species being affected. Pangolins are being wiped out for their meat and scales. Rosewood is being plundered from forests for timber. Smuggling of rare iguanas for the pet trade is decimating wild populations, an illicit trade that spans three continents, with the animals being poached in the Bahamas, trafficked into Europe and south-east Asia, and involving nationals from at least five countries. Illicit trade affects every country across the globe.

The vast majority of officials are honest and committed. We salute them. Yet we also see customs and police officials bribed, logging and hunting licences forged, and poachers and wildlife traffickers set free due to obstructed prosecutions. We must root out the “bad apples” and deepen efforts to build and maintain properly paid, trained and equipped civil services, in every country, including Cites and enforcement authorities and park rangers.

We cannot afford to turn a blind eye to this serious challenge. We have no option but to confront corruption head-on by fully deploying the international agreements created to combat corruption and to regulate wildlife trade in a coherent manner.

That is why, in December 2015, corruption and wildlife and forest crime was the focus of a dedicated side event that we co-hosted at the sixth session of the Meeting of the Parties to the UN Convention Against Corruption.

Cooperation between the UN Convention against Corruption and Cites is strong and we look forward to achieving universal membership for both conventions in the near future. UNODC and Cites are working together to integrate the tools to prevent corruption, and to facilitate the prosecution and punishment of offenders, with the international rules set for trade in wildlife.

We are determined to help countries shatter the international criminal networks that supply this illicit trade and we are united in the belief that by aggressively addressing corruption, we can deal a lethal blow to all those involved in these highly destructive transnational organised crimes.

Since Cites parties last met in Bangkok in 2013, discussions of the scourge of corruption has shifted from the corridors into open plenary and at this month’s meeting parties will have before them, for the first time, a dedicated resolution on prohibiting, preventing and countering corruption.